Tncient Chinese texts tell us that around 2700 BC, multi-hull junks were built: catamarans, improved stability and performance on the high seas. Such is evidenced by the paintings of Cro-Magnon caves along the coast of Indochina. Over time, the Chinese junks established an unequalled standard in boat building in Europe until the late sixteenth century.

In the beginning, the Chinese did not have strong fabrics to make sails, or sometimes, the use of fabrics was prohibited by local warlords (no doubt to prevent their citizens from venturing out further to see if the grass was greener). What was left at the bottom of the garden were some not very strong fan palm leaves, but also bamboo which, when cleverly added to the sail, reinforced it greatly. It is interesting to note that, even when the Chinese were able to obtain better fabrics for their sails, they never modified their form; because they soon realised that the junk sail functions very well, even when torn.

The Chinese junks, for those who have witnessed them in heavy weather, more so if they had the chance to sail them, are a fascinating topic; and one is surprised that it took so long for us to recognise the fantastic performances of this rig. When Slocleur already considered it as the most convenient in the world and Hasler, after his crossing the North Atlantic, proved its efficiency and declared that it is an extremely subtle rig and the more he learns to handle it, the more refined he finds it.

As a former officer of the French merchant navy, I have sailed the oceans 12 years; and I visited China, Indochina and Japan many times. We also had the privilege to sail several times on board a 37M junk from Hong Kong to Formosa – a trade junk, of course – which carried cotton bales and ciment, storm included midway. We were conquered, six knots on average, a fantastic directional and hull stability and a very honourable performance when sailing close hauled.

Years later, after designing many different styles of sail boats: cutters, sloops and schooners, which were gratifying but did not add much to my research in naval architecture; I went back to the junk rig that had so impressed me. More precisely the Chinese junks which, in my opinion, are the most beautiful (when compared with junks from Japan or Thaïlande for example). 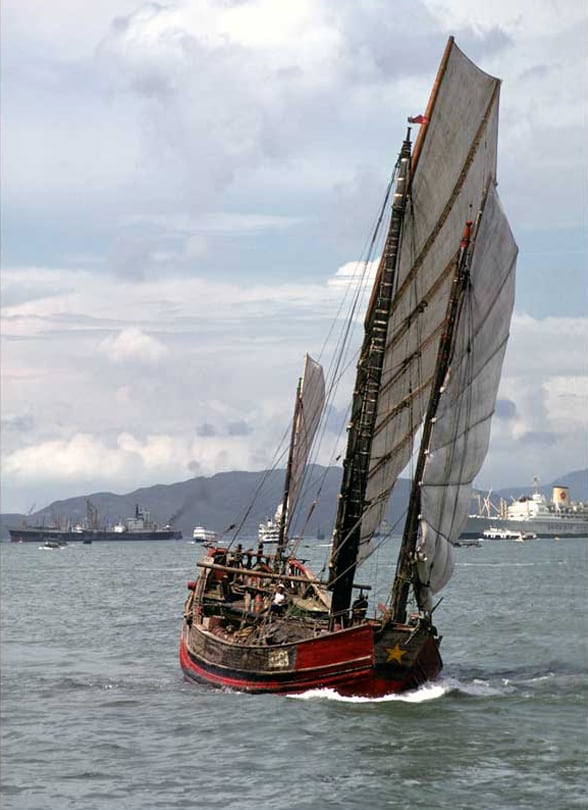 One feature of the Hong Kong trader is the presence of holes in the rudder in the form of losanges “to let the water through, of course”; surely there must be another reason!

Photos below: Shipyard at Cheung Chau, May 1973. Photo reproduced with the kind permission of Karsten Petersen© (See page)